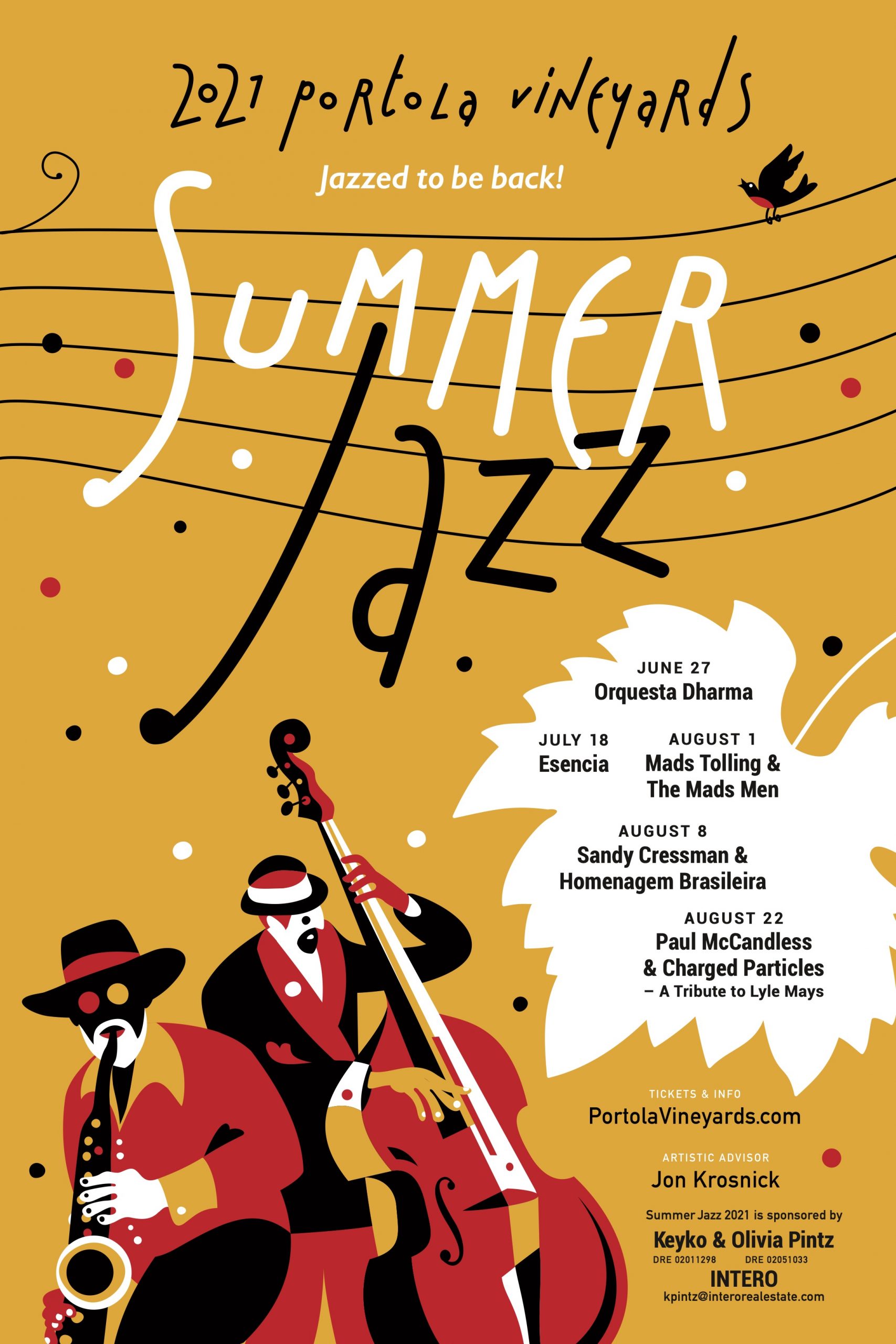 We're planning to return with SummerJazz in 2021!

Each summer, we host a series of fine jazz concerts outdoors, beside the vineyard.  A wine-tasting of our currently released wines is included, and we invite you to bring a picnic.  Wine is also available for purchase by the bottle. Music runs 6pm-7:30pm. We are open from 5pm-8pm.

The season kicks off June 27th with the Latin Jazz of Orquesta Dharma.  It's members include several Grammy winning musicians, and the very best of the Bay Area latin music scene.  SOLD OUT, BUT WAIT LIST IS ACTIVE

We have a special treat in store on August 1st, with violist, composer and two-time Grammy Award-winner Mads Tolling.  Mads has been featured on NPR’s Morning Edition, and his recordings have received rave reviews in Downbeat Magazine, Strings Magazine, Washington Post and the San Francisco Chronicle. He has performed with Chick Corea, Ramsey Lewis, Kenny Barron & Paquito D’Rivera. SOLD OUT, BUT WAIT LIST IS ACTIVE

The Brazilian jazz of singer and composer Sandy Cressman and Homenagem Brasileira performs on  August 8th. Sandy is joined by her husband, longtime Santana trombonist (2000 to 2016). SOLD OUT, BUT WAIT LIST IS ACTIVE

And the season will wrap up on August 22nd with Grammy Award winner and world renowned jazz superstar Paul McCandless and the celebrated jazz trio Charged Particles.  In this concert, Mays’ collaborator and Bay-Area legend, saxophonist Paul McCandless, will collaborate with Charged Particles to bring Lyle Mays' music alive, in a tribute to the man who has often been lauded as a true genius of jazz. SOLD OUT, BUT WAIT LIST IS ACTIVE

SummerJazz 2020 is sponsored by realtors Keyko & Olivia Pintz of INTERO.

You can sign up to receive news about our upcoming concerts and events.